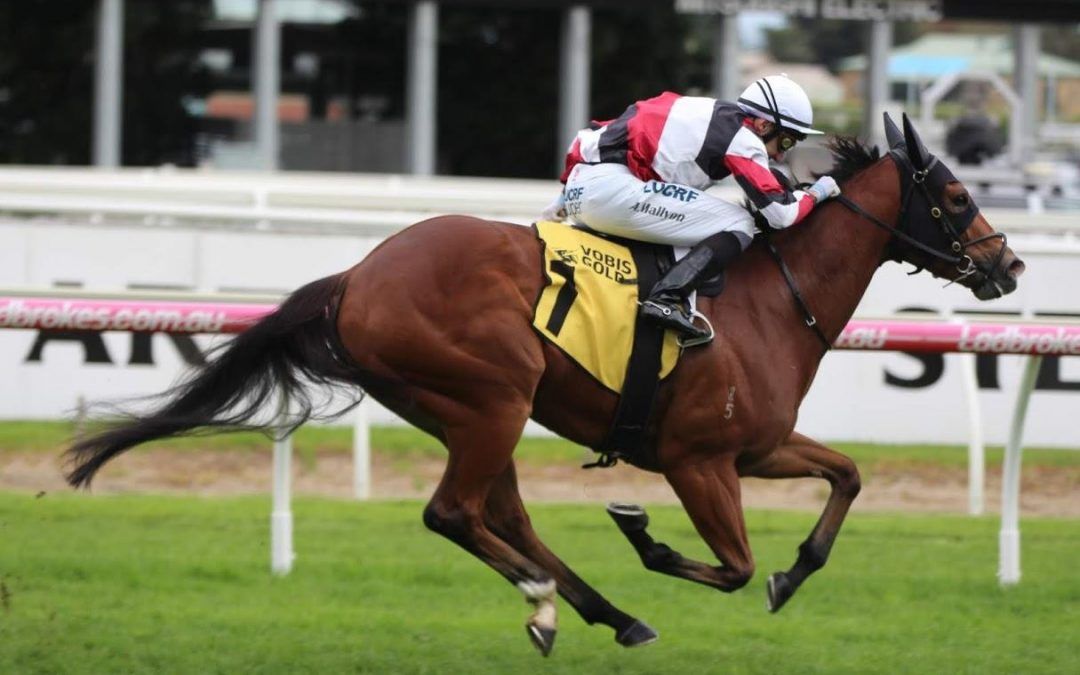 “I knew early he was going to be good,” Robbie Griffiths laughed as he enjoyed the post race euphoria provided by Halvorsen’s VOBIS Gold Dash victory at Caulfield on Saturday – “as a yearling he got me, I have never seen a horse move so quickly to kick me – I knew from then that he was going to be fast!”

A bit of pain at the time but the home-bred Halvorsen has paid Robbie back in spades, his latest success seeing him increase his prize money tally to over $292,000; a terrific effort after just 11 starts.

Already the winner of four races, Halvorsen boasts the sort of form lines to get Robbie and his co-owners excited – in late January the exciting bay easily defeating Hawkshot at Moonee Valley; that horse going on to a Autumn Stakes success and a second in the Australian Guineas.

“That sort of form gives you a bit of encouragement,” Robbie said, confident that is just a matter of time until Halvorsen earns his own black type, whether that be in the very near future or later down the track.

“There is the 3Y0 race (the Euclase Stakes) in Adelaide next Saturday but we will see how he recovers from this, we will nominate him and give him till Wednesday to see if he is ready to make the trip.”

“The furthest he has ever travelled is Bairnsdale but he is a sensible horse as all the Magnus breed are, and his dam was the same so he should handle it well.”

The Goodwood Handicap the following week is another possibility for Halvorsen but should he not be quite ready for interstate assignments there are other options closer to home.

But stakes racing still beckons – “at some point in his career he will rise above and run in those high grade races,” Robbie said.

Saturday’s race was an enjoyable though at sometimes tense watch for Robbie and the other owners, Halvorsen always travelling well for Andrew Mallyon but just needing that bit of luck as he approached the turn with horses in front of him.

“For a fleeting moment I was worried,” said Robbie – “Andrew had a handful of horse under him and nowhere to go but as quickly as I had those fears Andrew had him out into the clear.”

And from there it was all over, Halvorsen gaining momentum from the 200m and charging clear from the 100m, his winning margin a soft two lengths.

The ease of the victory came as no surprise to anyone at the stable with Robbie noting that “he is a horse who has always had terrific talent.”

“There has been lots of work put into making him settle and relax and the penny has really dropped now.”

“He is settling better and better each time he goes out and he really put them away quickly today… and there is sitll improvement to come.”

Very happy with Halvorsen’s finish when a first up fourth at Caulfield two weeks ago, Andrew was bullish heading to the track on Saturday – “I could not have been more confident coming to the races!”

Halvorsen is a special horse for the stable, his grandam Vaingt Trois one of Robbie’s first purchases in his early training days. She showed plenty of natural ability easily winning her Wangaratta debut only to be forced into early retirement with a fractured shoulder.

At stud Vaingt Trois proved a goldmine producing nine winners including the stakes winning sprinter Beltrois and the metropolitan winners Trimensa, Vaingtlago, Ruby Trois and Flourishing; the latter being the dam of Halvorsen.

She too had good ability, winning four races including one down the Flemington straight. She is a great pedigree match for one of the stable’s favourite stallions Magnus (a breed that just keeps on winning for us!) – this mating providing for a 4 X 4 cross of the terrific mare Easy Date.

Hence we are pretty excited that she is back in foal to Magnus – and we are sure that it will not be too hard to find plenty of people to race that future star with!