“Fidelia over the top again!” 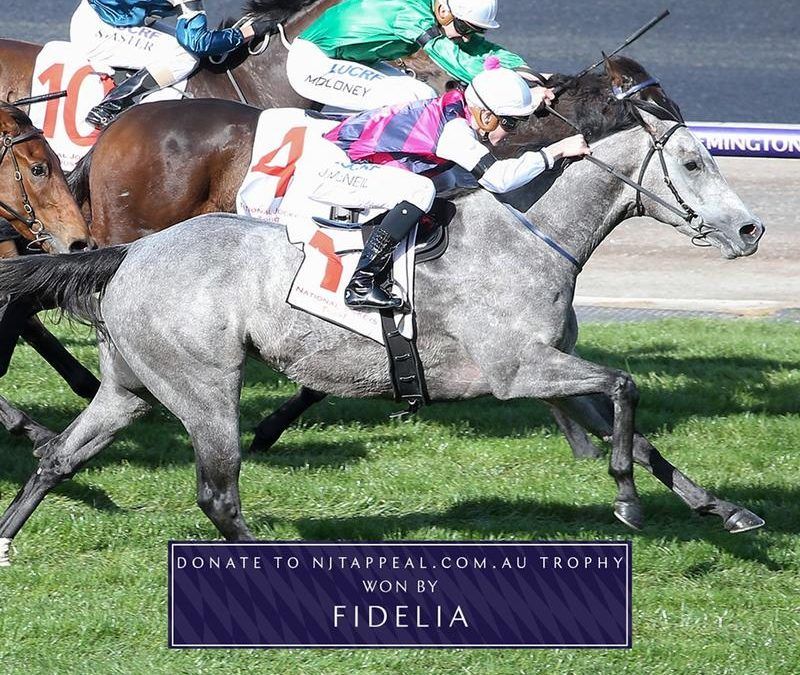 “Fidelia over the top again, that’s a big win!” exclaimed caller Matthew Hill as our wonderful filly stormed home to her fourth win in a row – her third at Flemington.

Each of those wins has been as exciting as the previous; Fidelia’s racing style ensuring that her loving owners and fans are given plenty of time to build momentum with their cheering!

As is her want, Fidelia settled well back in the NJT Appeal Trophy – as usual not keen to be bustled early. She was soon into a lovely rhythm for Jye McNeil who had her hooked out wide into the clear and ready to pounce from the turn.

She did not however look a good thing from there, the leaders kicking as she was going through her gears. She had plenty of ground to make up but was bridging the gap from the 300m, even closer at the 200m and flying from the 100m!

Despite hitting the lead only late Fidelia still managed to put a margin of half a length on her rivals, an effort made all the more impressive by the fact that she was taking on the boys for the first time since her debut maiden victory last July.

And she was giving them weight; the runner-up Adversary carrying 3kg less, the third placed Titan Blinkers 4kg less!

“She has really found some great form,” McNeil (who was on Fidelia at her first start) reported.

“She is never a good beginner but she relaxes so well in the run. She is sound and happy and it was a terrific effort by Robbie having her on the week back up. With that weight against the boys it was a win full of merit.”

“It was a task today – the seven day back up carrying a lot of weight against the males, she has done a great job.”

A great job rewarded with a rest, Fidelia heading to the paddock in preparation for an exciting four race spring; the Cockram Stakes, the Let’s Elope Stakes, the Blazer Stakes and the Empire Rose Stakes – the Gr.1 mile event contested on VRC Derby Day.

“We had time to give her that run today and still give her four weeks in the paddock,” Robbie said, adding that he has always had a big opinion of the daughter of Not A Single Doubt.

“From the get go we wanted to run her in the 1000 Guineas but she was immature and just not ready to do what we wanted so we put her out and gave her time – which is why we have her up now in the off season.”

“It is a great crew that race her, they have been supporting the stable for a long time and it is great to see them get a really good horse.”

Fidelia heads to the paddock as the winner of five of her nine starts, already amassing in excess of $290,000 in stakes.