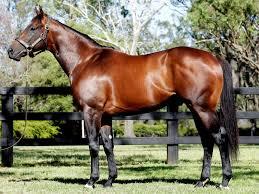 The double figure odds success of Rutherford, who snuck into Sunday’s maiden at Sale as second emergency, may have been a surprise to punters but it was not to connections with the lightly raced three-year-old always showing plenty of ability at home.

“He has always galloped well, always been a talent,” said the stable’s Beth Schroen, “and we have come to the races each time with confidence that he would do well – but he just hasn’t been bringing it to the track.”

It was however just a matter of time until the penny dropped and judging by the strength of Rutherford’s two length victory, it is beginning to!

Settling well back for Damien Thornton – who was enjoying a rare sleep in when the phone rang for the late pick up ride – Rutherford had plenty to do coming to the turn but, after hooking out second widest into the straight, he began to gain momentum.

Gathering in his rivals and racing clear late, Rutherford may have won by an even bigger margin if not for racing greenly.
“He never really travelled during the run,” Thornton reported – “I was constantly niggling at him.”

“But once I gave him a proper squeeze and pulled him out he picked up and let go nicely.”

“He got lost when he hit the front,” he added, “he just floated and want to lay in and do things wrong. He is still very raw, very immature and has a lot to learn.”

“I’d love to see him in six months time, I think he has plenty of upside.”

Schroen agreed – “he is as green as green but he still managed to put them away.”

Recently foaling a colt by Russian Revolution, Nuclear Force – who was competitive in stakes company – is also dam of the dual Gr.3 winning Queensland based stallion Defcon.

Wacey races Rutherford with a group of friends including Gabrielle Coulthard who was sipping champagne in celebration on Sunday evening!

“Robbie has always had a good opinion of him and we are looking forward to more wins,” she enthused.