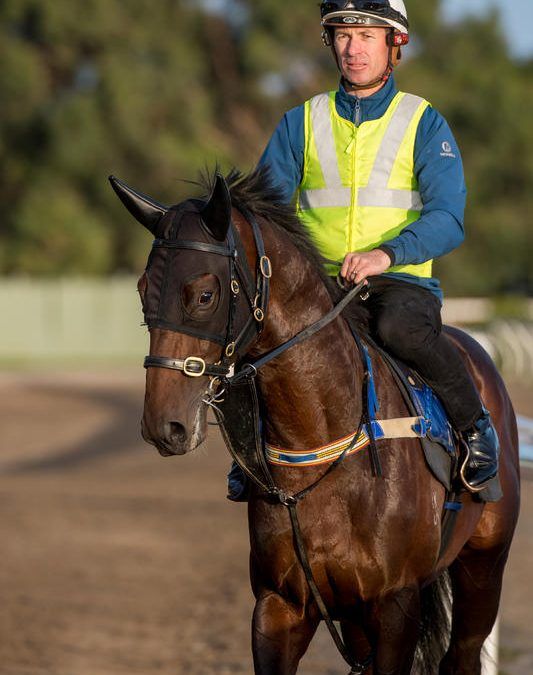 There were some anxious moments in the lead-up to the exciting two-year-old Glenfiddich taking his place in the opening event at Mornington on Saturday, the bay deciding to put on a display of bad behaviour at the gates!

It was an out of character performance for the youngster who had been, Robbie said “so relaxed” during his time at the track… “and he is normally good in the gates.”

Fortunately however Glenfiddich, who had also given Noel Callow a hard time getting to the gates (“he cooked himself going around and cooked himself again in the barriers!”), was more professional in the race – happy to take a sit third on the rails after jumping fast.

Callow was keen to have Glenfiddich on the fence, having noted watching his previous start (a close second in the Adelaide Magic Millions) that “he got a bit lost… I thought the rail would help him.”

Peeling off the leader’s back turning, Glenfiddich was in front straightening, giving a nice kick with 50m to go – quickly and impressively putting 2 3/4 lengths on his rivals.

“He is still learning,” Callow noted, adding that if not for being able to get that sit he may not have won as he may have just gone out a bit too hard if in front.

“But there was a bit of pressure on and it was good to be able to box-seat him.”

“Noel rode him beautifully,” Robbie said, happy to have won a nice race with the horse who had progressed so well since his Adelaide run.

“We had always planned to go to Sydney for the Sires and Champagne Stakes but we were a bit concerned about how things were shaping (border controls since announced) and this race looked like a great opportunity for him.”

By Danehill’s champion sire son Fastnet Rock, he is out of the imported Nothin But A Dream, daughter of the stakes winner Darling Alice.

Served last spring by Exceed And Excel, Nothin But A Dream hails from a high class international family which has been well represented in this part of the world by the likes of the Gr.1 winners Criterion and Comin’ Through.