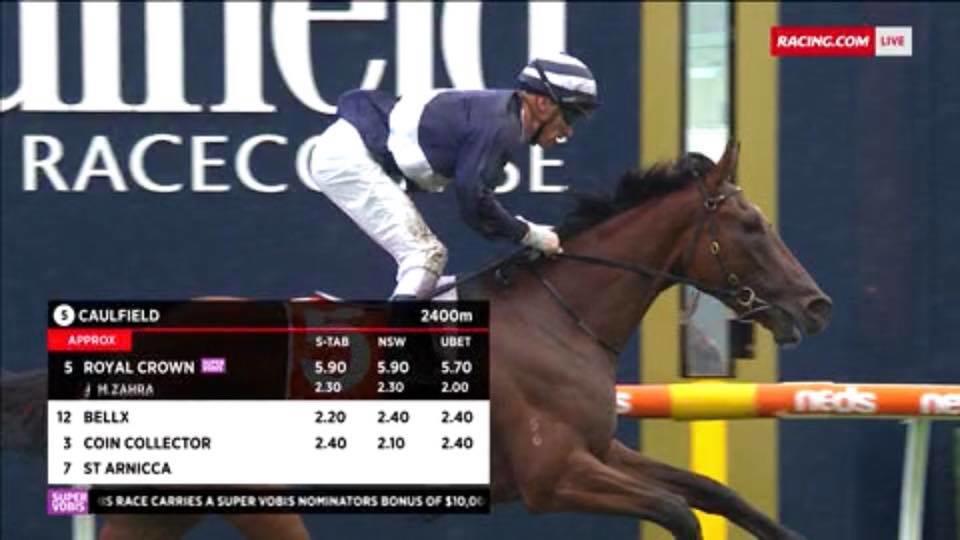 The stable have been having a lot of fun with Royal Crown who has been under our care as fellow Cranbourne trainer Mick Kent takes a holiday – especially on Saturday as the lightly raced and exciting three-year-old proved a class above his rivals in the Listed Galilee Final at Caulfield.

Cleverly steered by Mark Zahra, the big bold gelding settled back in the 2400m contest but with not a great deal of pace on he was able to hook out early – making a run from the 800m, cruising up to them at the 600m and straightening a length in front.

It was a fair way out for such an inexperienced horse to be left alone but, despite wanting to have a little bit of a look around, Royal Crown just kept finding – his winning margin an impressive 1 3/4 length.

“He did get a bit lost with no bunny to follow,” Robbie noted, “so it was a good effort – he is a strong and really promising stayer.”

“Mick had this race earmarked for him and it did look the perfect fit – all going well we can now press onto the St Leger at Flemington on Anzac Day and then on to the South Australian Derby.”

Joking that “Mick’s holiday is proving to be an expensive one (another member of the stable in Leale successful earlier in the day for Catherine Hutchinson),” Robbie said that he was pleased to have Royal Crown in the stable – “I rode one of Mick’s first winners so we go way back!”