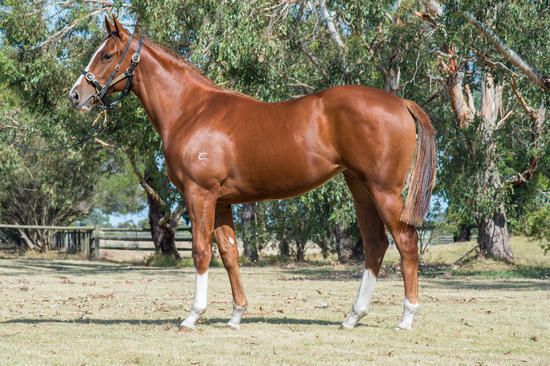 Massive odds for Miss Kansas at Bendigo on Sunday but the eye-catching chestnut did not know that she was unfancied by punters, showing both speed and heart to break her maiden in impressive fashion at only her second outing.

Thought highly enough of to contest the VOBIS Showdown at debut, Miss Kansas had little luck in that classy contesting, striking interference turning.

Not a great experience for a youngster but fortunately Miss Kansas took no harm from it and at Bendigo was fast out of the gates – straight to the lead and staying there, giving nothing else a chance as she held a good winning margin of 3/4 length to the line.

“She jumped cleanly, travelled well and kicked away on the corner,” rider Beau Mertens reported, adding that “it was a really nice win.”

“She has always shown great talent at home,” Robbie said, “but she drew a wide gate in a tough race at debut and didn’t get to showcase her true talents.”

“Her sire is flying at the moment so she certainly as the right genes… it was a terrific ride and she was just too good.”

“It was a terrific win and I can’t want to see how she progresses.”

Bred in NSW by Caithness Breeding, Miss Kansas is a daughter of Swettenham Stud’s in-form young stallion Toronado and the lightly raced Lonhro mare Longing whose first three foals are all winners including the city winner Yitai Synergy.

Out of the speedy Gr.3 winning Danzero mare Hinting, Longing was served by Vancouver last spring having produced a colt by Dissident in early September. She hails from the family of the classy stallions Habitat and Northfields.