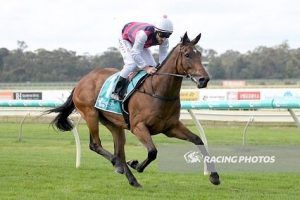 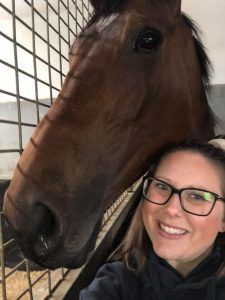 Developing serious leg issues as a foal, later requiring fetlock surgery, Divine Honours grew out of proportion but always standing out was his determination coupled with his lovable personality.

Delighting his owner/breeders Mark and Jennifer Hayes with his maiden success at Wangaratta in late June, he provided them with another thrill when racing away to an easy win in the 1600m BM58 contest at Bendigo on Saturday.

Sent out favourite having been a game Ararat third at his previous start, the four-year-old had to do a bit of early work from a wide gate for Matthew Allen but was soon into a good rhythm sitting off the leader.

Hitting the front straightening, Divine Honours was soon off and away – sprinting clear of his rivals to salute by a soft 1 3/4 length, doing a great job under the steadier of 62kg; conceding the runner-up a couple of kilos.

“He is a very genuine horse who gives his all,” Robbie said.

“We have to space his runs but he was going terrific leading into the race and was given a peach of a ride from Matthew Allen. He gets along with him very well and knows exactly when to push the go button.”

“It was fantastic to see him get another win on the board.”