Another first for de Kock 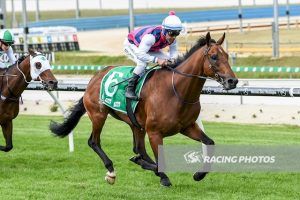 A first for our new trainer partner Mathew de Kock at Cranbourne on Thursday – his first winning interview on racing.com! Courtesy of the smart victory recorded by Our Chevalier in the 2060m BM64 contest.

Having just his second run at the trip – a game second a couple of weeks previously at the same track – the son of Redoute’s Choice travelled well throughout for Michael Walker and connections were entitled to get excited a fair way out.

Looming up turning, the four-year-old soon had the race in his keeping and his winning margin of 1 3/4 lengths was an impressive one.

“I am very happy for the whole team,” Mathew enthused, “everyone works very hard.”

“He ran a good race last time,” he continued, noting the strength of the form around the talented Excelman, “and he is holding his form well. It was a fantastic ride – well done to the owners.

A horse who has had his share of issues including a tie-back (wind operation), Our Chevalier does have good talent and has been honest with his two wins and five placings from just 11 starts.