ONWARDS AND UPWARDS FOR LADY D’ORO

What a tough victory it was recorded by Lady D’Oro in the final event at Traralgon on Saturday, the gutsy mare always wide from an outside gate – but still always travelling well for Matthew Allen.

Making an early move from well before the turn, Lady D’Oro loomed up ominously into the straight and was quickly putting ground on her rivals – her winning margin an impressive 2 1/4 lengths.

“It was a terrific win, one that really showed her class,” Robbie enthused.

“She had to travel wide throughout but once she straightened up she was never in any doubt.”

“There looks to be better things in store for her this preparation.”

It was the second win from just nine starts for Lady D’Oro who was having her first run since late May – racing well despite not always having the best of luck last time in.

Catching the eye at the 2018 Inglis Easter Yearling Sale, Lady D’Oro is a daughter the multiple Group One winning high class stallion Medaglia D’Oro and the Bendigo winning More Than Ready mare Morrego.

Also dam of the stakes placed Klammer, Morrego is a half-sister to the stable’s three times Group Three placed multiple city winner Nadeem Lass from the family of the five times Group One winner Eremein.

Lady D’Oro was bred by the Monds family of historic Tyreel Stud and they are pleased to have remained in the ownership, Linda Monds recalling what a lovely youngster the bay was.

“She was a very attractive, athletic looking filly,” she said.

“She was only small as a foal, but her mum is not a very big mare. She grew well once weaned and we always thought she would take a bit more time to mature. She always had a beautiful gentle nature about her.”

“Robbie has done a brilliant job and taken the time that she has needed.” 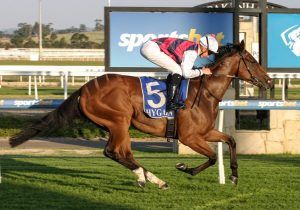