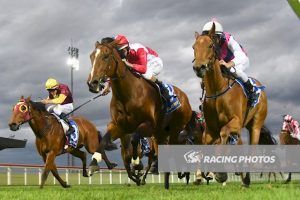 What great heart King Magnus showed over the final stages of the 1200m Class 1 contest at Pakenham on Thursday might – headed before fighting back to secure the second leg of the stable’s double on the back of earlier success for the promising Hasseltoff.

Having his first run since mid-March, the tenacious five-year-old enjoyed a nice trail off pace but wanted to get going early, reefing a little as he made an early run circling the leaders to join them turning.

Giving a kick with 200m to go, King Magnus engaged in a two horse battle with the favourite Toffee Doll who looked to have him covered. But our fella refused to concede, putting his nose down where it counted!

“He has got a really big heart,” Jade Matthews said, “he just tries so hard as you could see there – he was really fighting for it.”

“He is like all the Magnus breed, they just want to run.”

Already a two times winner from just five starts, King Magnus is out of the stable’s smart mare Influential Miss, a Flemington winner who has also produced, by Magnus, the four times winner Influential Girl.

This is a strong international family, one that has produced the Melbourne Cup winner Cross Counter and the multiple Group One winners Magical, Halfway To Heaven, Rhododendron and Photo Call.