King Magnus Makes It A Double 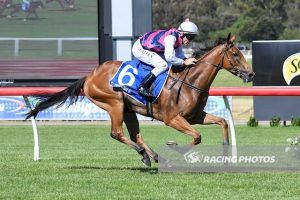 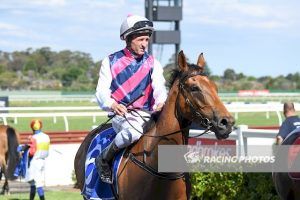 He was up in class and distance but again King Magnus proved too strong for his rivals at Sandown on Wednesday, providing the stable with the second leg of a winning double on the back of earlier success for La Pietra.

Also part of a good day for his sire (a stable favourite!) Magnus (also sire of the following winner Just Folk), King Magnus made it two in a row having been a determined winner of a Class 1 event at Pakenham a couple of weeks ago.

This time he was contesting a BM64, one with a fair bit of strength to it – so much so that despite his excellent lead-up form he was sent out at lovely double figure odds; great for his supporters!

It’s a long straight at Sandown and King Magnus, after saving ground railing turning, was in front by the 400m – giving a kick at the 300m with the others chasing. But he just kept on building momentum and his 1 1/4 length victory was an impressive one.

“He was terrific,” Robbie said.

“He is a lightly framed horse but he really has the determination to win, which he showed again today.”

Mathew was rapt – “I thought one winner was awesome, now I’m really excited!” he said, adding that “we were pretty confident; he has done nothing wrong, he drew well and was always going to get the run of the race.”

We are also delighted for King Magnus’ owners who have been such great supporters of the stable – and later in the day they came oh so close to a double with King Magnus’ full sister Influential Girl only just beaten in the final event.

Making it four runners for the stable for the day – two winners, two seconds; gotta be happy with that!