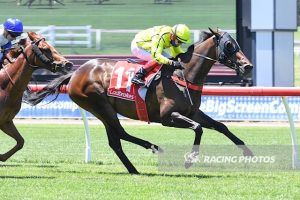 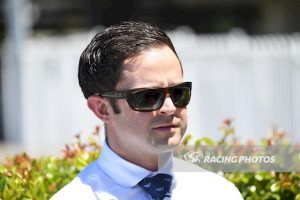 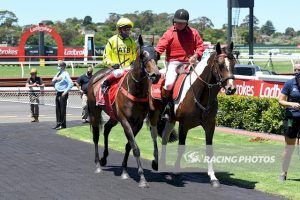 It was a breakthrough day for the stable at Sandown on Wednesday – each of our four runners putting in outstanding performances with La Pietra and King Magnus both in the winners circle whilst the latter’s full sister Influential Girl was only just beaten in the final event; Hasseltoff also a courageous second.
Whilst we have had our share of metropolitan doubles, this was a first for the new partnership and if Mathew was excited after La Pietra’s victory, he was ecstatic after King Magnus put the sealer on a memorable day.
“This is my first city winner, I am really excited – over the moon!” he enthused.
A lightly raced mare who has always shown good ability for her owners led by Australian Thoroughbred Bloodstock, La Pietra was having only her second run back from a spell having been so game in defeat when resuming at Ballarat earlier in the month.
Appreciating a step up to 1400m, the daughter of Pierro travelled strongly on pace, giving up an early lead when taken on but regaining it at the 300m and getting clear over the final stages to salute by half a length with a fair bit in hand.
“She is a nice filly,” Mathew said, “and we came here with a bit of confidence.”
“Though she has not been easy, she is a little quirky at home but a bit of maturity and a slight change in her training programme (more time on the treadmill) has seen her do a good job today.”
And there is more to come for the well related filly, a $160,000 graduate of the 2018 Inglis Melbourne Premier Yearling Sale.
“This is the bottom end of her distance range,” Mathew said, adding that “I am excited about her.”
Jockey Dean Yendall was happy with the way La Pietra travelled, content to let Summaroca take the lead with that horse wanting to pull a little. “She was tugging a little bit but the other horse was tugging harder,” he noted.
“So I just sat back off him. He seemed to be in a bit of trouble a long way out but I didn’t want to be going for my mare so soon… but when I did ask her to go she quickened up well.”
“She laboured a little bit late but I think she was out in front for so long that she was having a bit of a look around.”
Yendall was taken with the improvement La Pietra had taken from her first up run – “she was not only fitter but also more tractable than last time,” he said.
Bred by Hillside Parade Racing, La Pietra is the fifth foal and fourth winner produced by the imported Danehill Dancer mare Classic Music who was served late last year by Capitalist having produced a Pride Of Dubai filly in late October.
Also dam of the metropolitan winners Tenorino and Classic Diva, Classic Music is a daughter of the wonderful mare Pipalong who won ten races in a career spanning four seasons; success in the Gr.1 Haydock Sprint Cup a highlight.