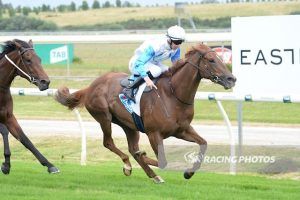 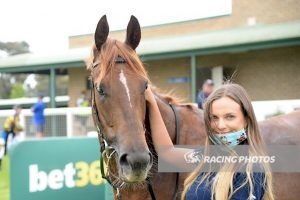 As noted by the caller – “Night Of Delight really digs in” – it was a particularly gutsy maiden victory recorded by the promising three-year-old at Yarra Valley on Saturday.

Having just her fourth start, and her first since late May, Night Of Delight chased the pace in the 1000m contest – hitting the lead soon after straightening with the challengers looming.

But she just kept fighting, showing good heart as she drew clear to record an impressive 3/4 length victory.

“It was fantastic to see her break her maiden,” Robbie said, adding that “she has returned in terrific order.”

“She had pleased us leading into the run so we were confident that she would give a good sight.”

“Hopefully the benefit of that win will be a gain in confidence so that she can continue on her winning way.”

Bred by managing part-owner Hayden Kelly, Night Of Delight is a daughter of the UK 1000 Guineas hero Night Of Thunder who shuttled only once to Darley’s Victoria base… a shame for local breeders as he is doing such a great job in both hemispheres with 17 stakes winners emerging from his debut crops.

Night Of Delight is the second foal produced by the multiple city winning Barely A Moment mare Whitten’s Delight. Recently foaling a Brave Smash colt, she also has a Street Boss yearling filly whilst her two-year-old Rupert’s Delight (by Winning Rupert) is also a member of our stable.

A sister to the stakes placed Awakened, Whitten’s Delight hails from the family of stakes winners Thousand Veils and Perast.