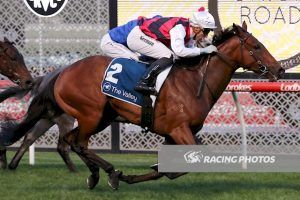 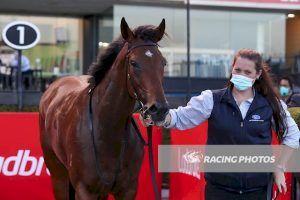 Having only just been beaten when partnering the tough and honest mare Influential Girl at Sandown on November 25, Lewis German learned much from his first ride on her and took that experience to Moonee Valley on Friday night.

Where he and she were able to go one better – a well timed ride seeing the bay swoop on her rivals in the F&M 2040m BM70 contest; in doing so recording the fifth success of her consistent 18 start career.

It was a metropolitan breakthrough for the mare who has also won at Moe and Pakenham, and a deserved one with her previous Sandown effort such a gutsy one.

Getting back off an awkward start, Influential Girl travelled well for German who had her edging closer form before the turn – well within in striking distance as the field turned for home.

And she pounced strongly, looking to have plenty in hand as she drew clear late to salute by a soft 3/4 length.

“He rode a spectacular race on her,” Mathew de Kock enthused. “He learned a lot about her from nine days ago.”

“We were in a lovely spot,” German said, “though I was a bit worried when Ollie’s horse (the favourite Night Witches) was getting a nice but in the end she was too good and she showed the ability she has.”

“She is only small but she has such a big heart,” de Kock said of Influential Girl who is a daughter of the stable’s favourite stallion Magnus. She is a full sister to her recent Sandown winning stable mate King Magnus out of our Flemington winner Influential Miss whose stakes winning grandam Persian Secret is the third dam of the 2018 Melbourne Cup winner Cross Counter.