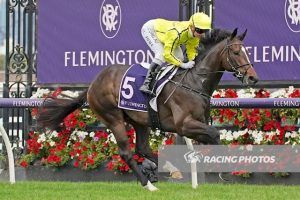 2 3/4 lengths is an impressive winning margin anywhere – but especially at Flemington and was a big performance it was by Hasseltoff who was so dominant claiming the BM70 1700m contest on New Year’s Day.

Only just missing out on the bob at the same track in mid-December, the talented bay was right in the market and it was an easy watch for his supporters – Hasseltoff always travelling well behind the leaders.

Joining in with 300m to go, Hasseltoff was quickly off and running for the in-form Jamie Kah who was always confident despite needing a bit of luck coming to the turn.

“When you have that much horse underneath you it doesn’t take much once a gap presents – and when it did he was out in a second,” she said.

“He relaxed beautifully,” she continued, adding that “he did that very easily – and he is probably even better ridden a pair further back. But today he was just the best horse and he can go on to bigger and better things.”

“I was a bit nervous when they were turning for home,” Mat de Kock admitted – “just hoping he’d get a clear run as he was so full of running.”

But no concerns in the straight with Hasseltoff (who has been out of the placings only once in his nine start career) racing clear – “he won convincingly,” Mat enthused.

A home-bred for Australian Thoroughbred Bloodstock, Hasseltoff is a son of the dual Gr.1 winner Toorak Toff and the Tasmanian winning Flying Spur mare Hoop who so sadly died without producing another foal.

Hasseltoff’s third dam is the terrific mare Hula Wonder – winner of 13 races, two of those at Gr.3 level. Her dam Natural Wonder was also a ripper, winning 12 races – three of them being Listed contests. Mother and daughter were both trained by the late Roger Hoysted.