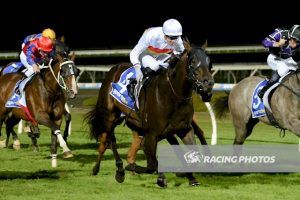 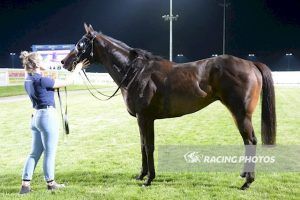 It was a barnstorming victory recorded by Rutherford at Pakenham last Thursday evening, the tough four-year-old giving connections plenty of reasons to cheer as he swamped his rivals from the rear in the 1200m BM58 contest.

Enjoying a drop in class having been to town on a couple of occasions following an easy Geelong victory when resuming, Rutherford did a great job under the considerable steadier of 63.5kg – recording the third success of his 14 start career.

“He was terrific, “Robbie said.

“He has always shown us a lot of talent but he does get a little field shy so when Jye (McNeil) was able to get him to the outside, he hit the line really well.”

A home-bred for Kevin Wacey’s Gleneagles Stud, the cleverly named Rutherford (he is out of Nuclear Force – named after Ernest Rutherford, “the father of nuclear physics”) is by Woodside Park Stud’s William Reid Stakes winner Foxwedge.

He is one of four winners (from as many to race) for his multiple city winning dam who has also produced the dual Gr.3 winning young stallion Defcon. Served last spring by Russian Revolution with youngsters by that stallion and Choisir coming through, Nuclear Force hails from the family of the VRC Oaks & 1000 Guineas heroine Rom’s Stiletto and the stakes winners New Smyrna, Danzigs Silver, Spirited One, Dr Sweet, Rockettes and Xaaravid.