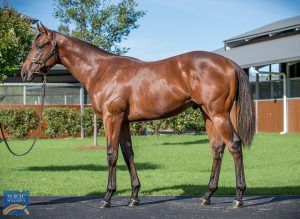 What a great start the brilliant Shalaa has made to his southern hemisphere stud career, in the headlines as the sire – from his debut crop – of the runaway Magic Millions 2Y0 Classic winner Shaquero.

Also winner last spring of the Gr.3 Breeders Plate at Randwick, the Gr.1 Golden Slipper Stakes bound Shaquero is one of his sire’s first 13 runners in Australia and what terrific natural talent the breed are showing… his other local runners including the exciting Nice For What who really caught the eye charging home to go close in the Gr.3 Ottawa Stakes on Oaks Day last year.

Three length debut winner Saasmit is another classy prospect for Shalaa as are the lightly raced city placegetters Tayla’s Moment (a Flemington debut second) and Hunnam (third at Rosehill at just his second outing). Meanwhile in the northern hemisphere there have been 20 individual winners (four of those earning black type) emerge from Shalaa’s impressive first crop.

The winner of six of his eight starts, Shalaa who – like the outstanding stallion I Am Invincible – is by the great Danzig’s wonderful son Invincible Spirit (Gr.1 Sprint Cup winning sire of 130 stakes winners including 20 Gr.1 winners) – was seen at his best taking out the Gr.1 Prix Morny and the Gr.1 Middle Park Stakes, two of Europe’s most prestigious juvenile contests.

Crowned the Champion 2Y0 Colt of both the UK and France, Shalaa was described by superstar jockey Frankie Dettori as “the best two-year-old I’ve sat on.”

This imposing colt from Shalaa’s second Australian crop is out of the very talented race mare Rationality – winner of five of her 12 starts at Flemington, Morphettville and Geelong. A tough sprinter/miler, she is showing plenty of potential as a broodmare with her first foal being the classy three-year-old Bartley.

A $660,000 Magic Millions yearling who raced seven times for the Snowden stable, Bartley bolted in at his Kembla Grange debut, progressing to a city win and two stakes placings (including a close Gr.3 Black Opal Stakes second) before heading to Hong Kong where he is currently in work.

Rationality’s second foal is the $380,000 Magic Millions graduate Revivalist who only recently trialled very nicely at Randwick, also trained by the Snowdens. This fellow his her third foal and after missing to Shalaa in 2020 she was served last spring by Written Tycoon.

Rationality is a full sister to the terrific galloper Mentality, winner of eight races and over $2.1 million in stakes – his career highlights including successes in the Gr.1 Champagne Stakes, the Gr.1 Randwick Guineas and the Gr.1 George Main Stakes.

Also winning at Gr.2 level on three occasions and in Listed company twice, Mentality was joint top rater of both the two and three-year-old categories in the Australian Horse Of The Year ratings.

Already two of Rationality’s half-sisters have produced stakes winners, Weekend Gossip being the dam of the Gr.3 Skyline Stakes winner I’m All The Talk (who is doing a great job at stud in Western Australia) and the dual Listed winner Straturbo whilst Blue Note is the dam of the juvenile stakes winner Gold Force and the stakes placed city winner Bluebrook.

Shalaa has already proven that he works well with a Danzig (4 X 4 X 4 here) duplication with seven of his first winners bred in this way… including Shaquero who, like this colt, is out of a granddaughter of Danehill.

This is an extension of the success of the Invincible Spirit/Danzig combination, one that has produced 104 stakes winners including the Gr.1 gallopers Persian King, Loving Gaby, Brazen Beau, Oxted, Sound Of Freedom, Hellbent, Most Improved and Shalaa himself. Little wonder this works with Invincible Spirit and Danzig both being descendants of the influential mare Mowerina.

Also from the prolific Mowerina family is Rockefella of whom Shalaa carries three strains within six generations whilst the great mares Pretty Polly, Mumtaz Begum and Queen Mary are also duplicated in the background.

FOR INFORMATION ON THIS EXCITING COLT and all other Magic Millions purchases contact us at: jack@griffithsracing.com.au