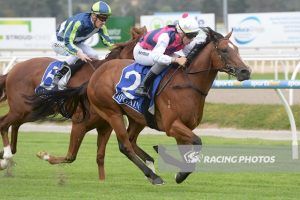 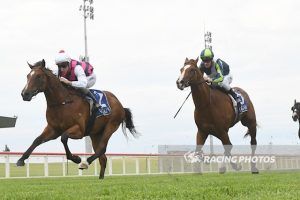 “You can’t do much better than win at debut!” said a happy Robbie Griffiths after the impressive victory recorded by the promising colt.

Patiently ridden by Lewis German, the son of Press Statement was not pushed early off an awkward start, settling towards the rear of the small field. When asked for his effort turning he responded gamely and from the 100m was drawing clear… his winning margin a soft one length.

“He has always shown us that he is a class horse,” Robbie said, “and we thought he would appreciate the 1200m better than the 800m of the trials he had been contesting – and that was the case.”

“He looks like a class colt and we can’t wait to see his future unfold.”

Debuting at Pakenham on January 28, Daily Bugle was unfancied in the betting – a good result for those who did support him!

Bred by Ken Williams who remains in the ownership, Daily Bugle is a son of Hinchinbrook’s Caulfield Guineas winner Press Statement and the city winning Danehill Dancer mare Hold Me Closer.

Also dam of the Gr.3 Norman Robinson Stakes winner Thought Of That, Hold Me Closer is a half-sister to the speedy Listed winner How Funny from the family of the stakes winners Jester’s Girl, Assimilate, Smart Win and Twining.

Served last spring by Brazen Beau, Hold Me Closer produced a So You Think filly in early October and also has a yearling filly by Spirit Of Boom.