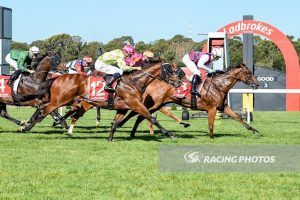 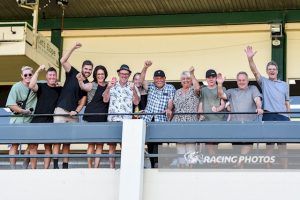 “A little warrior,” is how Robbie describes King Magnus who was so tough to the line saluting at Sandown on January 23 – the terrific galloper recording his fourth success from just 11 starts and his second at metropolitan level.

“There is not much to him physically,” Robbie said, “but he is all heart and when push comes to shove he digs deep.”

Enjoying a nice run under the guidance of Lachlan King, King Magnus got to the middle of the track in the straight and was always travelling well, hitting the lead with 50m to go and getting clear over the final stages.

“With a patient ride by Lachlan he was just too good for his opponents,” said Robbie, adding that “he deserves all the success he gets as he is such a consistent galloper. His owners will certainly continue to have a lot of fun!”

As his name suggests, King Magnus is a son of our favourite stallion… his progeny just keep doing the job for us! His dam is the Carnegie mare Influential Miss, a Flemington winner who was also a member of the stable as is her Moonee Valley winning daughter Influential Girl who is also by Magnus.