RUSSIAN BY HER RIVALS 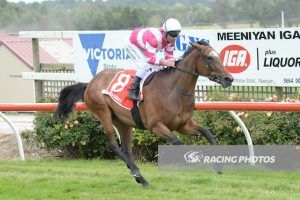 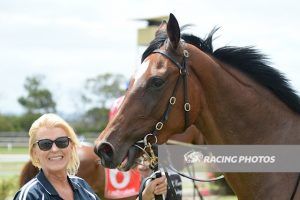 “An easy watch,” is how the stable’s Beth Schroen described the maiden victory recorded by the lightly raced and promising Russian By at Stony Creek on Tuesday… and indeed it was, the three-year-old impressive with a soft 2 1/4 length victory.

Having just her third start, the bay dominated on pace, initially sitting inside the leader before taking over at the 600m and dashing clear into the straight.

“She is a big girl with a lot of improvement come both physically and mentally,” reported jockey Michael Walker.

“Considering that it was only her third run, and that she had a really good blow afterwards, for her to win quite easily was a great effort.”

“She was strong to the line and the further she goes the better she will get.”

“She’s got a good brain and good lungs – I am looking forward to seeing her get over a bit further as she furnishes out more.”

“Michael rode her to perfection,” Schroen said, “he followed all instructions… he had her there on the corner ready to go and she did the rest.”

“She is really learning her trade now and is getting better and better at each start, she is a nice horse.”

Bred by her happy owners, Russian By is a daughter of Larneuk Stud’s Gr.2 Theo Marks Stakes winning Fastnet Rock stallion Cluster and the New Approach mare Just A Kiss who recorded her maiden success over 2449m.

Served last spring by Ilovethiscity, Just A Kiss also has a Cluster two-year-old by the name of Galaxy Reign in the stable. She hails from a strong international family with her dam being a 3/4 sister to the four times Group winner Takarian who was successful in strong company in both Ireland and America.