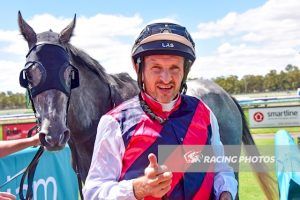 It was a deserved breakthrough for Irish Pardon at Bendigo on Saturday, the consistent four-year-old having been in the placings on five occasions before giving connections the thrill they had been so keenly awaiting.

“He had been knocking on the door so it was good to see him apply himself,” Robbie said, noting that “it was a good ride from Matthew Allen and a reward for his patient owners.”

Always travelling well a bit better than midfield in the 2200m contest, Irish Pardon was into the clear turning and was able, once getting to the lead, to hold off all challengers and certainly had the better of them all saluting by 3/4 length.

A graduate of the 2018 Inglis Melbourne Premier Yearling Sale, Irish Pardon is a handsome grey son of the Melbourne Cup winner Fiorente and the lightly raced Pins mare Madame Reprieve.

Also dam of the Macau based five times winner River Triple, Madame Reprieve was served last spring by Overshare having produced a colt by that same stallion in October. All but one of her foals to date have been grey, a colouring that can be traced back to here third dam sire Lumley Road, son of Grey Sovereign.