It was lovely to see Northern Reign break through for a maiden success at Stony Creek on Monday, the lightly raced and promising four-year-old having had little luck in the lead up – finding early trouble at her previous start 11 days ago.

This time enjoying a lovely trail, patiently steered by Michael Walker, Northern Reign was able to edge closer to her rivals from before the turn and she was so game to the line – saluting at just her fifth outing, stepping up to the 1700m for the first time.

“She has been a slow maturer,” Robbie said, noting that the daughter of Fastnet Rock is bred to keep getting better as she gets over more ground – “that is the furthest we have been able to get her over so far and she is just going to keep improving.”

A home-bred for long time clients; raced by Colin and Kathy Pearce of Princeton Stud with Robbie and Shiranee, Northern Reign is the second winner produced by the imported Galileo mare Galivant.

Served last spring by Dundeel, Galivant was a winner at Chester before sought out by Peter Ford. Racing five times for the stable, she won over 2200m at Ballarat for us and we look forward to getting her daughter up to similar trips… and beyond.

A descendant of the prolific mare Simon’s Shoes (also ancestress of Sadler’s Wells, Nureyev, Thatching and Fairy King), Galivant is out of a half-sister to the Sydney Cup winner The Offer, the German Listed winner Cymbal and the UAE stakes winner Musha Merr. 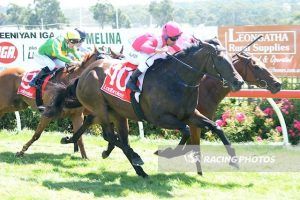