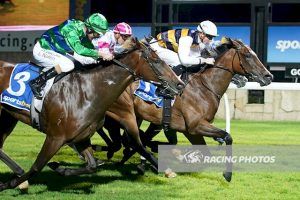 A filly who has always shown plenty of natural ability, Yosemite was able to kick off her latest campaign with a gutsy victory at Pakenham on Thursday night.

Having her first run since the spring, the up-and-coming bay settled nicely a tad worse than midfield for Jye McNeil and coming to the turn looked to have plenty to offer.

One of the widest into the straight, Yosemite showed good heart wearing down her rivals, holding off a late charge by the runner-up Montia to record the second success of her six start career.

Her win was part of a big night for Jye McNeil – one of his three winners.

“It was perfect the way the race panned out,” he reported. “We were wide but with cover off a slow tempo and she travelled well into a good position.”

“She hung in a bit under pressure late and had a good blow so there is plenty of improvement to come out of that. She is a nice filly for sure.”

“That was good for her confidence – to get that win on the board first up,” said the stable’s Jade Matthews.

“She was very strong fighting it out. There is a race over 1300m at Sandown for her in a couple of weeks and I am sure she will keep stepping up through the classes.”

A highlight for the stable was having our very patient owners back in the thick of things – “they have missed all of her racing career to date because of covid,” Matthews said, “so it was nice to have them here and close again – it is very exciting for them.”

Racing in the blue, gold and white silks of OTI Racing, Yosemite is a well named daughter of the Gr.1 winning High Chaparral stallion Redwood and the two times winning Keeper mare Morena whose dam is the Gr.3 Summer Cup winner Zanetta.