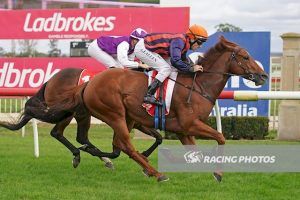 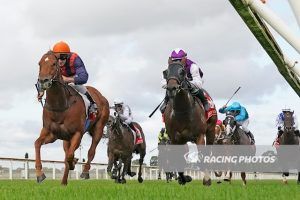 Tough mare Stravain looks set for a great campaign having put in her best ever first up performance – a fighting victory at Sale on Tuesday.

Having her first run since last winter, the five-year-old enjoyed a lovely trail along the rails for Matthew Allen who had her poised to strike entering the straight.

Showing good heart wearing down the leader, Stravain recorded the fourth win of her 19 start career, increasing her prize money tally to beyond $130,000.

“She has come back in great order,” said the stable’s Beth Schroen.

“She had a decent spell and is looking fantastic.”

“We thought she’d run a good race as she has been trialling really well but we were a bit worried that she might be a bit soft if it came to a fight to the line.”

But the concerns were unfounded with Stravain looking to have plenty left getting the upper hand late.

“It was the perfect race for her,” Matthew Allen said. “She drew well, had a lovely run in the race and she did the rest.”

“She is going better than she has ever gone,” he added – “and she is probably ready to go to town now, there is a nice midweek mares race for her somewhere.”

It was wonderful to have Stravain’s owners back on course, Beth noting that “they are very excited… it is great that we can have them back on course, getting up close to see her again.”