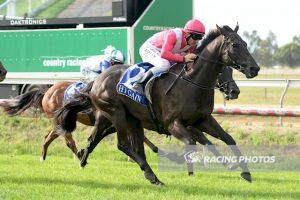 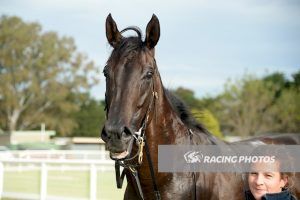 Nicely primed and too strong at his third run in, The Running Man looks ready for a step up in class on the back of his dominant performance at Bairnsdale on Sunday.

A well fancied favourite having been close up at his two previous outings, the five-year-old had been out of the winners circle for a while but now gelded he looks ready to go on with the potential he has always displayed.

“He could find one or two better but he has always been thereabouts,” jockey Matthew Allen said, adding that “he was holding a bit too much condition at his first two runs this time in but he was a lot fitter today.”

“He travelled in a handy spot and I was pretty confident straightening up. Hopefully he can put a few wins together now – he can gallop and he should be winning better races.”

“It has just taken a couple of runs to get him to peak fitness,” the stable’s Beth Schroen reported, noting that “this was a good race for him… he was ridden to perfection and was strong to the line.”

Always travelling well just behind the pace, The Running Man was into the clear at the top of the straight – engaging in a two horse battle with Quality Diamond, getting the upper hand late to salute by a soft 3/4 length.

A son of the outstanding stallion Zoustar bred by Gerry Harvey, The Running Man was purchased at the 2017 Gold Coast Magic Millions and he races in the hot pink and white colours of long term clients Colin & Kathy Pearce.