You Can Bank On Her 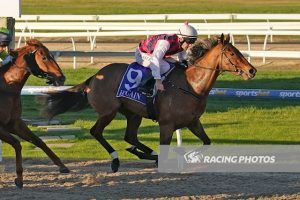 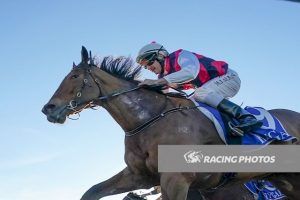 The lightly raced and promising filly Miss Bank Place looks set for a good campaign having impressed with her first up victory at Pakenham on Monday.

Having her first start since January, the three-year-old daughter of our favourite stallion Magnus drew a tricky outside gate but a patient ride by Matthew Allen saw her enjoy a good run.

Settling third last after finding early trouble, Miss Bank Place hugged the rails as she approached the turn, saving ground turning before taking the splits as they came – hitting the lead with 100m to go and getting clear to win by a soft 3/4 length.

“Plan A was to get out quick and sit close to the pace,” Allen said, “but she was checked at the start and we had to go to Plan B pretty quickly!”

“She is only little so I didn’t want to go out wide and bump into other horses and I knew if the runs came she would be hard to beat.”

“It was a fantastic ride,” Robbie Griffiths enthused, adding that “we just love the Magnus progeny and as we also trained Miss Bank Place’s dam this was a very rewarding win.”

Bred by Greta West Stud, Miss Bank Place was secured for a bargain $36,000 at the 2019 Inglis Melbourne Premier Yearling Sale. Her dam Tottenham Girl by Dash For Cash won three races for the stable.

Also dam of the two times winner Blaze Of Glory, Tottenham Girl is a daughter of the stakes placed Flying Spur mare White Hart Lane who also produced the stakes winner Lucky Penny. This is a family that has enjoyed most of its success in Tasmania with the stakes winners Poacher’s Star, Escapada and The Old China.