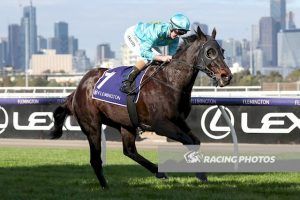 With only one rival behind her as she entered the Flemington straight on Saturday, Don’ttelltheboss looked to have the job ahead having been slowly away in the Bruce Gadsden Handicap.

But her heart and determination was not to be underestimated, the four-year-old weaving her way through the field, at the 100m getting in between the two leaders – dashing clear and holding off a late challenge from Lindhout.

“She has been running fantastic races without winning so I am really chuffed for her today,” Mathew de Kock enthused, “it is very good to see her back into the winners stall.”

“The race worked out perfectly for her, she enjoys the soft gong and she likes to get to the front late. She had a lot of horses in front of her and used the whole straight to run them down. She is a tough mare who has had a long preparation, the team have done a great job with her.”

It was the first Flemington success for the in-form apprentice Alana Kelly, a day she will undoubtedly remember and we are happy that it was one of our team to do the job for her!

A three times winner of over $315,000 in stakes, Don’ttelltheboss is a home-bred for Robbie who, as it turns out, wisely passed her in at the 2018 Inglis Melbourne Premier Yearling Sale.

Ensuring her future value with her two metropolitan successes and her two Gr.3 placings, Don’ttelltheboss is by Street Boss out of the lightly raced Seymour winner Canterbury Hill who was also a member of the stable.

Served last spring by Cable Bay having produced a Toronado colt in mid-August, Canterbury Hill is a daughter of another talented Griffiths trained mare in Cancanelle, a Gr.1 placegetter from the family of stakes winners Elite Elle and Rich Habit. 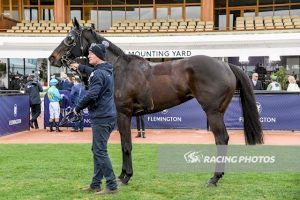 Don’ttelltheboss has links to Australian racing history, being a descendant of Herowinkie who produced one of the greats of the turf in Hallmark, the Australian Racing Hall Of Fame member who won the equivalent of 14 Gr.1 races including (in one memorable year) the VRC Derby, the AJC Derby and the Melbourne Cup.