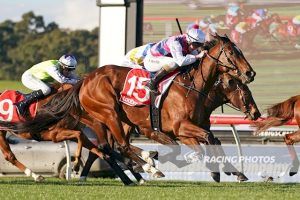 There are not too many bigger thrills for a racing fan than to cheer on a backmarker, that sense of guarded anticipation as they make their run from a long way back – will they get there? Oh how the excitement builds which each stride!

And that is how the barnstorming mare Lady D’Oro won the Ladbrokes Handicap at Sandown on Wednesday – off a good start from an inside draw drifting well back, relaxing beautifully for the in-form apprentice Alana Kelly.

Into the clear straightening, Lady D’Oro had seven or eight lengths to make up from the 400m and with the two leaders giving a nice kick her task looked to be a formidable one.

But as she let loose, connections had every reason to start cheering. By the 200m she was five lengths off them, by the 100m three. And right on the line she had her nose in front – recording the fourth success of her 18 start career and her second at metropolitan level.

“The way the race worked out is the way she likes to run,” Mathew de Kock said, noting that a strong pace suited the tough four-year-old’s pattern.

“They went at a good galloper providing her the opportunity to attack them late which is what she loves doing.”

Having her first ride on Lady D’Oro, Alana Kelly was delighted with how things worked out.

“I just let her find her own feet and kept her happy. I wanted her to get into her own rhythm rather than bustle her up to get a position and I was really happy with her coming to the turn.”

Heading towards at Flemington contest in two and a half week’s time, Lady D’Oro will be looking to further enhance her already good prize money tally of over $150,000 – and she certainly deserves a Saturday success.

An Inglis Easter Yearling Sale graduate bred, born and raised by the Monds family at the famed Tyreel Stud property, Lady D’Oro is a daughter of Medaglia d’Oro and the city placed More Than Ready mare Morrego.

Morrego’s grandam is the Gr.2 placed Marscay mare Marrego who did such a great job at stud producing six winners including the five times Group One winner Eremein, the Group Three galloper Peace Force and the Listed winner Gliding. 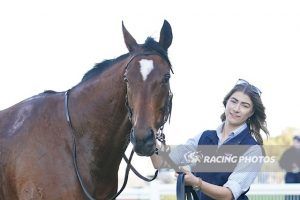