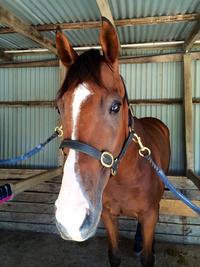 The stable's great run continued at Ballarat on Wednesday with a winning double - Gilago successful early in the day and Zadon a few races later proving too strong in the BM64 1600m event.

Having only his second run back from a spell, the lightly raced and promising son of Zabeel was sent out an odds-on favourite having really caught the eye with a fast-finishing first up third at Sandown two weeks previously.

Appreciating a step up in distance, Zadon jumped smartly for Ben Melham and was always travelling well just off the leader.

Hitting the front early in the straight, Zadon had a fight on his hands as the challenges came but he just kept digging and was easily holding his rivals at bay - saluting by half a length with plenty in hand.

Ridden upside down to suit the day, Zadon is a better horse from back in the field but jockey Ben Melham read the race well.

"The wide gate and the big weight was a big of a concern as it looked like it could be a sticky race on paper," he explained.

"So when he jumped well I was happy to get him across and rest him through the breeze."

The stable's Don Healy was also happy - "when you look at the head-wind he was racing into it was a good win, he has done well."

"He was always going to win," he continued - "he is a good horse."
Melham agreed, noting that "he was obviously the best horse in the race."

A two times winner from just seven starts with plenty more to come, Zadon was a bargain $80,000 Melbourne Premier purchase out of a 3/4 sister to the European star Zafonic.