Three In A Row For Gilago 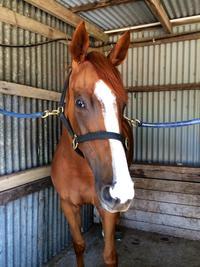 There is just no stopping Gilago - the four-year-old continuing her great winning form at Ballarat on Wednesday, racing away to her third easy win in a row.

Kicking off her winning streak with a 1 3/4 length victory at Warrnambool in late December, Gilago rose in grade at that same track next time out - winning by two lengths.

Facing yet another class rise on Wednesday she was well respected by punters who sent her out favourite.

At first enjoying a nice trail settling fourth on the rails, Gilago lost her position when the pace went on with rider Chad Schofield forced to make an early run on her out wide at the turn.

"She hit the lead really really early but she was just too good," he said -"she won easily!"

The stable's Don Healy agreed - "she did really well," he said, adding that the chestnut will "continue to work her way through the classes and she will probably get to the city in the not too distant future."