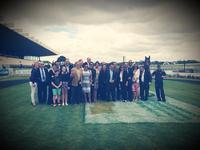 A horse named after one of the world's largest gold mines is chasing diamonds after a stunning debut victory in Monday's Listed Blue Diamond Preview at Sandown.

Sent out at double figure odds against some of the state's most gifted juveniles, Burnstone was ridden quietly by Damian Lane, given time to find his feet back in the field.

Always travelling well, the regally bred colt spotted his rivals several lengths coming into the straight but in the style of a true professional he made a strong run along the rails.

Sneaking up to fourth by the 400m and second by the 300m, Burnstone was soon in the lead and away he went - giving his rivals windburn as he raced away by 3 1/2 lengths.

"I love him!" enthused jockey Damian Lane who - like everyone else - was impressed by the colt's performance.

"He was very professional, he took everything into his stride and didn't put a foot wrong."

"He travelled beautifully in the run and his acceleration was great."

Noting that "he raced himself into Blue Diamond contention today," Robbie was delighted with his charge's performance and grateful that he was able to secure the son of Redoute's Choice for just $40,000 at last year's Inglis Melbourne Premier.

"We bought his full brother the year before for $220,000," he recalled, adding that sadly that colt died in a "freak accident."

Upon inspecting Burnstone as a yearling Robbie and Shiranee were immediately taken with the bay - "we paraded him up and down and really liked him. He was a bit smaller than his brother but we just thought that meant we would get him a bit cheaper, maybe around $100,000."