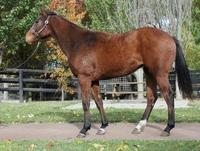 Any concerns that the long trip to Warrnambool might prove a bit too much for a first starter were quickly dismissed as Powerossa raced away to an impressive victory at her debut on Tuesday.

"She wasn't worried about it at all," a happy Jade Matthews reported, "it was a long day for her but she did everything perfectly. She is just such an easy horse, she does everything you ask her to do."

Getting back in a slowly run affair, Powerossa had a bit of work to do approaching the turn - having to make her run out wide before taking the lead with 150m to go and racing clear by 1 1/4 lengths.

"She came out and made it look easy!" Matthews enthused.

Jockey Matthew Allen was concerned in the early stages that the pace was just not strong enough but he read the race well and was happy with how his charge responded.

"It was just pedestrian speed so I thought I'd get going and she picked up the bit nicely."

Confident that Powerossa has the scope to go on, he described her as "a very laid back filly."

"The way she relaxed today indicates that she will get over further - she is still a bit green and will improve a lot... she has got a good future."

A daughter of God's Own, Powerossa is out of the city placed winning Testa Rossa mare Saffrossa, a full sister to the metropolitan winner Red Hustler.