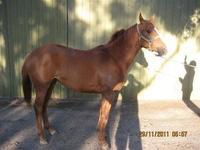 Having run two nice races at her first two runs this preparation, La Consolidata was sent out favourite at Sale on Thursday and she did not let her supporters down, finishing strongly to take out the final race on the programme.

In doing so she provided the stable with yet another double and her victory was much enjoyed by her owners Ray Wregg, Anne Wregg, Marcus Wregg, Jon-Paul Wregg and Tarnished Racing.

Getting back in the 1400m BM64 contest, La Consolidator hooked out wide into the straight and was impressive reeling in her rivals before racing clear to win by 3/4 lengths under the steadier of 60kg.

"Gee that straight is long into that head wind!" jockey Nick Hall reported, adding that La Consolidata "was very good through the line."

"And you would imagine that on that sort of run she'd be better going up in distance."

From 19 starts a four times winner, La Consolidata was bred by the Wregg family out of the placed Honour And Glory mare March To Glory who they also bred.

The stable has enjoyed good success with this family, March To Glory being a half-sister to the multiple city winner Gogonski and the city placed five times winner Sir Charlemagne.