It's One - second leg of our Sandown double 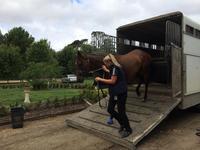 It has taken a little while to work out just what makes It's One tick but with some tinkering of her gear we think we have her just right - and her form certainly indicates that!

A tough winner at Mornington on New Year's Day, It's One took that form to Sandown on Wednesday - recording her second win in a row and her third from 14 starts.

The key to her current run of success has been the addition of visors to her gear, neither blinkers or winkers doing the trick at previous outings.

"She has been a mare who has lost concentration quite easily," Robbie noted, "but with blinkers on she'd over-race - so we put winkers on and she was just a bit blasé."

"So we split the different and put a set of visors on so she has a bit more vision - she raced well with them on at Mornington and was good again today."

Still wanting to wander around a bit once she hit the lead, It's One nevertheless found the line well after covering ground and swinging wide at the turn.

"The visors have worked perfectly," said jockey Mark Zahra who was pleased with the determination It's One displayed

"I wanted to work forward to sit outside the leader but she missed the kick. But it worked out alight as she had cover and she chases really well. Once she got there she was all over the place but she had something there."

It's One is a home-bred for Gerry Harvey who has had horses with the stable for several years - "he has been a fantastic supporter of us," Robbie said, "and we are really appreciative of that."

By the recently deceased champion NZ stallion O'Reilly, It's One is the second winner for the city winning Montjeu mare Numero Douze.
Served last spring by Helmet, she is a daughter of the stakes winner Tristachine.