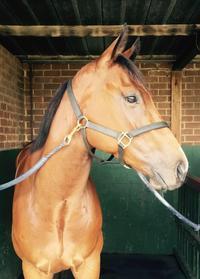 A 20 year association was celebrated with a win at Sandown on Wednesday, Ivan Culliver steering the lightly raced and promising

Winston's Lad to a smart victory in the 1200m maiden.

An integral part of the success of the stable, Culliver has, says Robbie "ridden a couple of hundred winners for us - probably more!"

Meeting when Robbie was himself a jockey, the pair have been friend and colleagues for a couple of decades with Culliver playing a big part in the everyday running of the stable.

"Especially in the early parts of horses' careers, " Robbie said - "his judgement is very important in assessing where we go with each horse; when they are ready to fire, when they have had enough."

"He rode him well at Geelong last start and followed it up today which is great."

The ride was an especially good one as things did not go exactly to plan in the early parts of the race.

"We actually thought we'd ride him back today," Culliver reported, "but the pace was a bit muddling early so we had to go to plan B - and he showed that he can cope with that which is good."

Jumping well before taking a sit just behind the leaders, Winston's Lad raced a little keenly at first but soon settled into a nice rhythm.

Clear into the straight he took a few strides to gather momentum as the leaders gave a kick but from the 150m he started to wear them down and after hitting the lead with 80m to go he was able to draw clear by 1 1/4 lengths.

Culliver took great pleasure from the win, saying that he has always liked the son of Churchill Downs.

"It is nice to see them come from the yearling sales, pick out the ones you like and follow them through," he said.

A $45,000 Tasmanian Magic Millions graduate bred by Armidale Stud, Winston's Lad is a half-brother to the Gr.3 winner Triple Asset out of the city placed Caralowe.

A daughter of Hennessy served last spring by the well related Needs Further, Caralowe is a granddaughter of the stakes winner Biscalowe, dam of the Golden Slipper winning successful stallion Marauding.