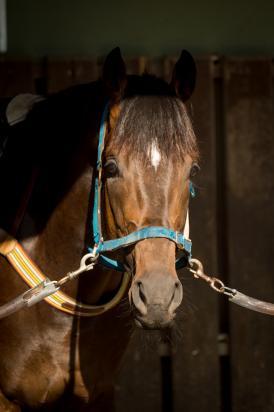 He was an odds on favourite and he won like it, Le Boss super impressive breaking his maiden at Pakenham on Sunday - the first leg of a two track treble for the stable.

A close up fourth when racing in the worst part of the track at his previous run at Sandown. Le Boss was sporting blinkers for the first time at Pakenham and he won in the style of a horse really going places.

Initially settling back in the field, Le Boss crept closer to the action a long way before the turn, looming up ominously nearing the bend and turning in front - racing clear in the run home to win by a softfive lengths.

It was a big win with Le Boss having raced wide to make his early run but Brad Rawiller was never concerned.

"He is a pretty big horse and I didn't want him to get cluttered up. This is a beautiful track so I was not worried about covering a bit of ground, it was more important to get his momentum going."

"He got himself into a good position turning and just put them away."

The stable's Beth Schroen said that she is looking forward to Le Boss contest longer races, "he looks to be at least an 1800/2000m horse," she said, "but we will take him step by step."

A full brother to the city winner Zaboss out of a Zabeel half-sister to the Singapore Gr.2 winner Itmaybeyou, Le Boss is raced by Melbourne Cup winning owner John Richards with Browns & Kirks, Deane Lester and Sandra Borschmann.