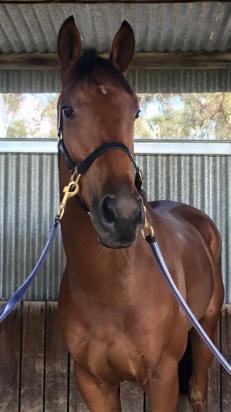 The second leg of our Sunday treble was Redwood Gardens, a dominant maiden winner at Echuca.

Having been a game third after covering ground at his previous run at Bendigo, the lightly raced and promising son of Nicconi was sent out favourite and was always travelling like the winner.

Though there was brief cause for concern early in the straight when Redwood Gardens was boxed in for a few strides, he was soon into the clear and strong to the line.

Wearing down the leader who had skipped clear as he was held up, Redwood Gardens was doing his best work after he passed his rivals - drawing clear late to win by an impressive two lengths.

"The further the race went on the better he looked," noted race caller Adam Crettenden.

Robbie Griffiths was very happy to see Redwood Gardens, a horse who has always shown talent, break through.

"It was great to see him win," he said. "Jack (Hill) rode him well and he hit the line strongly."

"He is still learning his trade and I am sure he will continue to improve with further racing."

A home-bred for Graham Werner, Redwood Gardens is the second foal and first winner for the stakes placed Catbird mare Clawing who hails from the family of Melbourne Cup winner Subzero and Golden Slipper winning champion stallion Marscay.