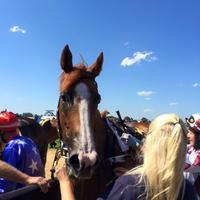 A rise in class proved no hindrance for the in-form galloper Gilago at Warrnambool on Sunday, the talented four-year-old racing away to an easy victory in a benchmark 64 event.

Making the most of an inside draw, Ryan Maloney had the daughter of Churchill Downs travelling beautifully behind the leaders along the rails and coming to the turn a win looked likely.

It was just a matter of Gilago getting out from behind the front runners which she did at the top of the straight and after hitting the lead with 100m to go she was able to get clear - her winning margin an impressive two lengths.

It was the second win a row for the attractive chestnut and it seems that the more she races the better she gets.

Victorian Equine's Mandy Allen was delighted by the victory.

"It was fantastic to see Gilago secure back to back wins at Warrnambool," she said.

"Robbie has always had a very high opinion of her ability but she had a terrible habit of missing the kick."

"Robbie and his team did a lot of work with to correct it so it's great to see her putting it all together on the track. We're all looking forward to bigger and better things for her in 2015."