Ell Of A Win 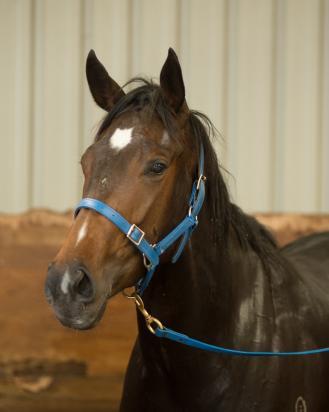 Green but good is Ell Factor who, at just her second start, was able to record a narrow but tough victory at Ballarat on Wednesday.

Kept very safe by punters having run such a good third at the same track ten days previously, the daughter of Stryker did plenty wrong that day and may have gone even closer if not for racing so greenly.

The penny had still not dropped by start number two but a patient ride by Luke Nolen saw Ell Factor find the line, much to the delight of her owner/breeder Tony Penglase.

Riding Ell Factor for the first time, the in-form Luke Nolen was impressed whilst noting that she still has a lot to learn.

"She is a raw product, she has got ability but she is still pretty rough around the edges," he said.

"I thought if I found the fence with her today it would give her a bit of security but she wanted the other fence!"

Proving difficult to ride after a brilliant beginning from the outside gate, Ell Factor wanted to run out firstly at the start of the race and then again at the end - a protest from the runner-up ensuing but dismissed.

The winning effort contained all the more merit considering that Nolen was afraid over the final stages that his saddle would slip - "if I rode her out any more strongly it was going to go right around," he said.

Ell Factor is the first foal produced by La Lady who raced just once. Served last spring by Americain having produced a Reward For Effort colt in late Octobr, she is a half-sister to the durable dual stakes winner Verco Road.