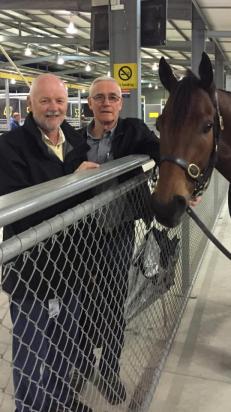 A step up to 1600m proved the winning move for the consistent Roman Fizz who was most deserving of his game victory at Pakenham on Thursday night.

Not the fastest out but able to improve to sit fourth of the eight runners, Roman Fizz travelled well as the field was hit by driving rain.

Taking the lead with 200m to go, Roman Fizz held off a late challenge from Momentary and able to hit the line hard, saluting by 1 1/4 lengths with plenty in hand.

"He has been wanting the mile," said jockey Matthew Allen who had been confident during the run.

"He got into a nice spot and enjoyed the trail and he was nice and strong to the line."

Roman Fizz, a son of one of our favourite stallions Magnus, was welcomed back to scale by a big group of enthusiastic owners who deserve kudos for facing rather demanding weather conditions!

The win was our third for the day on the back of a Wangaratta double by Felicette and Another Martini.