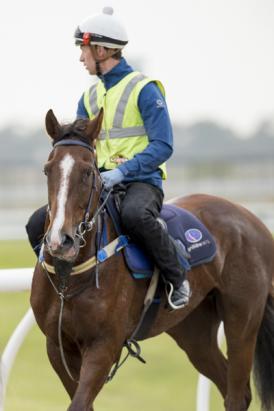 It was good to see Hollywood Tycoon break through at only his third outing, the three-year-old overcoming a bit of trouble in running to find the line well at Geelong on Sunday.

Enjoying a nice trail behind the leaders for most of the race, Hollywood Tycoon did lose a little bit of ground after copping a slight check around the 600m - needing things to go right from there into the straight.

Fortunately the gap did come and Hollywood Tycoon was keen to take it, hitting the lead at the 200m and getting clear to win by a comfortable 1 1/4 lengths.

It was the first time aboard Hollywood Tycoon for Brad Rawiller and he was taken by the style of the win whilst noting that the lightly raced chestnut still has scope for improvement.

"He is a horse who still does a few things wrong, he is still learning the caper and that win will do his confidence a lot of good."

A bargain $10,000 Inglis Melbourne Premierpurchase for Hancox Bloodstock, Hollywood Tycoonhandled the soft going at his first attempt and was happy up to the 1500m from 1200m.

"We were a bit worried about the track as we were not sure if he would handle it," said owners representative Rod Peacock, "but he did a good job."

"He is still not fully mature," he continued - "he has a long way to go yet."

A son of the in-form Written Tycoon, Hollywood Tycoon was bred by Northern Lodge Stud out of the unraced Woodman mare Our Hollywood Miss.

Served last spring by Nicconi having produced a full brother to Hollywood Tycoon in September, she is also dam of the metropolitan winner Silk And Diamonds whilst her dam is a half-sister to Australian Horse Of The Year Research.

Further back in the pedigree is an even more famous horse, Hollywood Tycoon having as his seventh dam Raphis, full sister to the legendary Phar Lap.