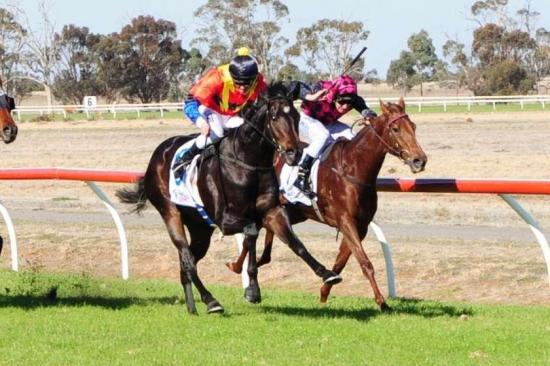 He was a bit further back than usual but that did not stop talented three-year-old Written Addiction finding the finishing line at Ararat on Thursday.

Patiently ridden by stand in jockey John Allen - who was having his first ride for us - Written Addiction was suited by a strong pace and once out into the clear in the straight he was able to really let go.

Charging home out wide, Written Addiction hit the lead with less than 50m to go and in just a couple of strides was able to get a length clear, doing a good job to salute under the steadier of 60kg.

"They went out hard and he ended up two or three pairs back further than we thought he would," Reid Balfour said, "but John didn't panic and he steered a course for him out wide."

"He copped a bit of a prat coming to the first turn but after that he seemed to travel really well and he ran right through the line."

"That win," he added, "will be great for his confidence."

"The plan was to be a bit further forward," John Allen said, "but we got a good trail into the race and when I put him under pressure he really found for me."

A two times winner from just six starts, Written Addiction is a son of the in-form Written Tycoon out of the winning Viscount mare Addiction, a half-sister to the Alister Clark Stakes winner Domesky.