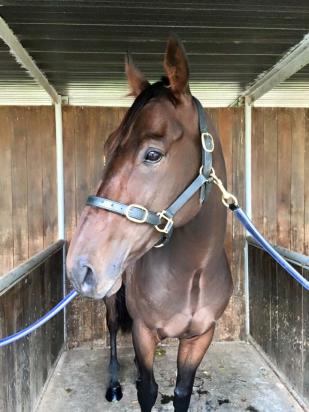 What great form King Deano has been in of late, the tough and consistent five-year-old winning two in a row in March/April and again finding the finishing line at Bairnsdale on Sunday - the second leg of a stable double.

Sent out favourite on the back of a strong finishing Wangaratta third at his previous outing, King Deano was patiently steered by Matthew Allen who did not panic when the King de Lago gelding was held up from the turn to the 200m.

Hooking off heels into the middle of the track, King Deano gathered momentum and wore down his rivals, putting his nose out right where it counted.

It was win number five for King Deano who is giving his owner/breeders the Alateras family a great ride!

A half-brother to the metropolitan winner Stormy Bill and the three times winner Need To Exceed, King Deano is a son of the dual city winner Pattie Royale. A half-sister to the stakes winners Garter King, Orb and Royal Sceptre, she was served last spring by Jungle Ruler.