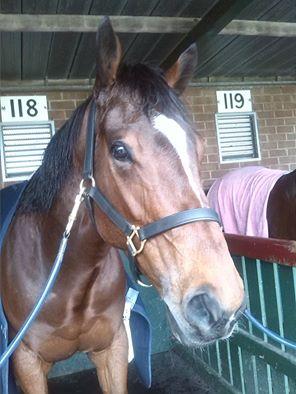 It was a deserved metropolitan break through for gutsy mare Magnagem at Sandown on Saturday, the talented but lightly raced five-year-old putting her nose out right where it counts in the Ladbrokes Handicap.

A mare who has always shown plenty of talent but who has had a few issues with her knees, Magnagem has been consistent throughout her career - winning four of her 11 starts and figuring in the placings on a further four occasions.

"She is a really talented mare," Robbie Griffiths enthused, "and she really deserved a city win next to her name so I am delighted for her and her owners."

Jockey Ben Thompson was also happy having been second on Magnagem when first riding her at Caulfield in late April.

"It was very close," he said when asked if he knew he had won - "and you can never been that confident when you are fighting out a finish with Damien Oliver!"

"I have been riding quite a bit of track work for Robbie Griffiths so it is great to get a winner for him."

Remembering that he "fell in love" with Magnagem at the 2012 Inglis Melbourne Premier, Robbie was pleased to win the bidding for the daughter of Magnus and all the happier when her breeder Robert Crabtree decided to retain half with regular stable clients taking the rest.

The stable have had great success with the Magnus breed and this lovely girl is a daughter of the dual Gr.3 winning mare Coniston Gem.