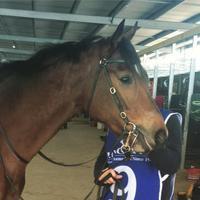 He may have been green but he certainly knew how to find the line, Geoff so impressive saluting at his Pakenham debut on Tuesday.

Well rated outside the leader by Ben Melham, the Beneteau two-year-old took over at the 200m - and away he went, wayward but brilliant!

"He is still very raw," Melham noted, adding that "he gave me the impression that he wanted a bunny. When he got to the front by himself he had no idea what to do."

"He had to do it all by himself and I think if there had been a challenger to him he would've lengthened again."

Exciting to think that Geoff has the ability to win even more impressively considering that his margin was a soft two lengths.

"He did a lot wrong," said the stable's Reid Balfour.

"He was very green in the straight but I like the way he drew away from them at the finish."

A bargain $10,000 Inglis Classic yearling, Geoff is the fourth to race and the fourth winner for the Danzero mare Granma Gertey who was Gr.3 and Listed placed at two; second to World Peace in a Blue Diamond Preview and to Alinghi in the Quezette Stakes.

Hailing from the family of Group One sprinter Wanted, she is a daughter of the multiple stakes winner In The Mist, also dam of the three times Group winner De Lago Mist, in turn dam of the triple stakes winning young stallion Instinction.