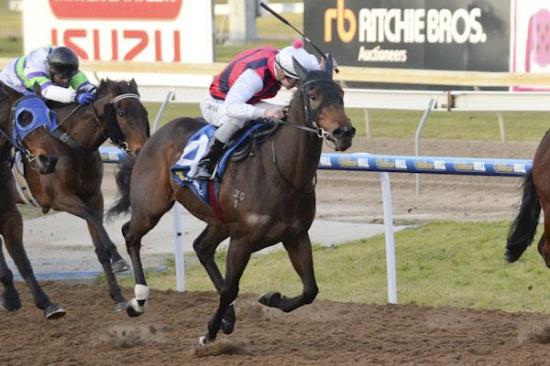 It was a barnstorming victory by Tigerdan on the Geelong synthetic on Tuesday, the four-year-old as he is want to do drifting a fair way back before really letting go over the final 200m.

As the leader skipped clear half way down the straight Tigerdan was just gathering momentum and he was strong to the line, putting his nose out right where it counted.

And in doing so the son of Hold That Tiger recorded the second win of his 14 start career, one that has seen him figure in the placings on a further four occasions.

Regular rider Jye McNeil was pleased to see Tigerdan win his first race since last spring, noting that "he has been a bit frustrating of late, always thereabouts without winning."

But Tuesday was his day and McNeil is confident that he may get over a bit longer than the 1200m of this latest victory.

"I was a bit worried mid-race," he reported - "it was a hot speed and he was never really travelling well."

"But the way he let down was very promising."

Bred by his owners John Laing, Tony Wilson and David Cecil, Tigerdan is out of the unraced Danzero mare Zero Currency, also dam of the metropolitan winner Cash Currency and the provincial winners Faithful Mary and Keep The Currency.