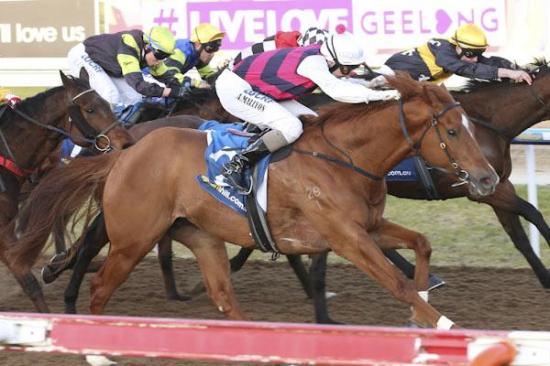 There is something especially exciting about a swooper, his supporters' tension building as he hooks out and begins the charge home. Each stride is cheered on and there is an explosion of excitement as he hits the line!

As was the case with Nightcraft at Geelong on Tuesday, the dashing chestnut drifting well back from a wide gate before hooking out turning and flying home to grab victory on the line.

Little wonder then that his owners were on such a high - including Jill Stewart whose infectious enthusiasm caught the eye of racing.com's Terry Bailey whose interview hit social media soon afterwards.

"I love you, I love my horse!" Jill exclaimed, shaking as she talked about her beloved horse.

"He has been so unlucky and we were worried about the barrier today," she said as she sent her best wishes to the stable and her fellow owners.

A bargain $34,000 purchase by Robbie at the Melbourne Premier, Nightcraft is a handsome chestnut built very much in the mould of his globe-trotting multiple Group One winning sire Starcraft.

Bred by Northern Lodge Stud, he is a half-brother to the city winners Bring Back and Around The Clock out of a metropolitan winning ¾ sister to the dual Gr.1 winner Nothin’ Leica Dane.