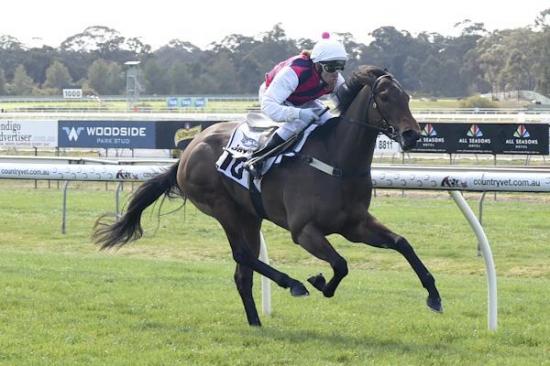 When breeder Steve Whitling rang Robbie Griffiths to discuss his Magnus filly he was in for a pleasant surprise, the trainer quickly blurting out "I'll take her!"

"He laughed and said 'but you haven't even seen her,'" Robbie recalled.

But Robbie had inside knowledge having trained the filly's dam Belleluia, a lightly raced mare he had plenty of time for.

After racing away to an easy 3 1/2 length victory at her Traralgon debut in October 2009, the daughter of Bel Esprit slipped at her next outing, the injury incurred enforcing her early retirement.

Raced by a large syndication, she was sold to Whitling who, in 2011 made the bold decision to send her to Magnus.

Bold because Magnus is a son of the terrific sprinter Scandinavia who is of course also grandam of Black Caviar (pictured) - and Belleluia is a 3/4 sister to that superstar.

Meaning that her daughter - who her owners christened Scandimania - is bred on a 3 X 3 cross of her own third dam, the Vain mare Song Of Norway.

And she pleased the stable from day one - "she has always had the talent," Robbie said, "she just had to prove it on race day."

Which is exactly what she did at Bendigo on Friday, the bay showing good pace, sticking close to the rails and putting on display her family's renowned turn of foot to win by a soft 2 3/4 lengths.

"That was painless to watch," said Reid Balfour on course. "She has been a little bit immature so we have taken our time with her - it was great to see her win so easily at her first start."

Jockey Ivan Culliver was impressed - "she quickened really well, she is a lovely filly."

Robbie said that he would "let the dust settle" before deciding where Scandimania heads next, suggesting that a short break might be in order.

"She still has scope for improvement and she looks to have a bright future," he said.