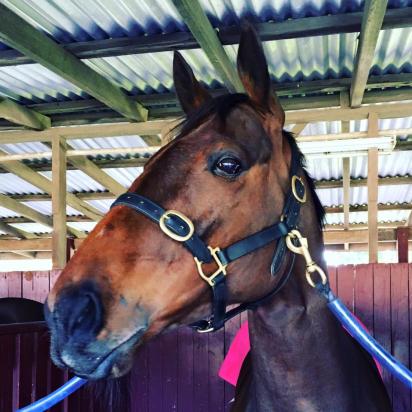 The stable saw Nadeem Lass head to the breeding barn as a winner and we were delighted to see Hot Mama also end her racing career on a high note, the tough mare saluting in determined style at Cranbourne on Thursday.

Out of the winner's circle for a while having suffered from pelvic issues, Hot Mama had nevertheless been in great form, her two placings leading up to her break through being game ones on heavy tracks which she has never really relished.

"The key was getting her back on a better track," said rider Matthew Allen who was happy during the run despite being caught wide.

"We couldn't get in but we got a bit of cover and a cart into the race."

Jumping fast, Hot Mama had others kick up inside her and half way through the race she was shuffled back. But she continued to travel well and coming to the turn looked to have plenty in hand.

Four wide into the straight, Hot Mama gathered up her rivals, putting her nose out right where it counted.

"That was a good way to finish," said Jade Matthews who had nothing but praise for the daughter of Duke Of Marmalade.

"She has been a lovely horse to have around, it has been a privilege to have her in the stable."

Retiring as the winner of four of her 23 starts and over $150,000 in stakes, Hot Mama has a booking to visit the dual W.S. Cox Plate winner So You Think.

Bred by Rangal Park Stud, Hot Mama is a half-sister to the Gr.2 placed Lady Ky out of the Keltrice mare Firestorm Baby, full sister to the stakes winners Northeast Sheila and Dashing Granada.

One happy owner on course for Hot Mama's final start was Jo Borg who won her share by bidding at a charity auction at the Final Field Cox Plate luncheon.

"I was very excited by her win," she said, "it is just a shame the other owners could not be there to share in it!"