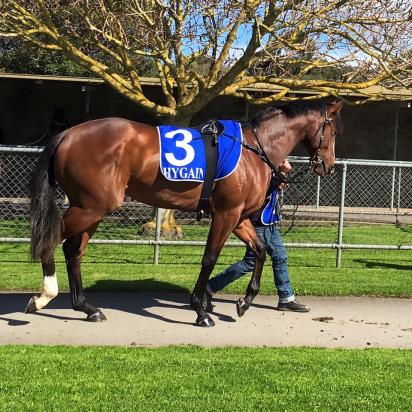 Hitting the front early in the straight having stalked the leader from the jump, Hay Bale was challenged from the 300m by runner-up Mr Sinatra but he just kept digging deep.

And he was getting clear over the final stages, his winning margin a strong 3/4 lengths.

"He really deserved that," said the stable's Beth Schroen, noting that the colt, despite always showing plenty of natural ability, had taken a few runs to break through.

Beth, like everyone else at the stable, is a Hay Bale fan, the good-looking youngster impressing all with his laid back attitude.

"He is a real professional, he is not fussed about anything. And today he just relaxed and did his job."

Regular rider Ryan Maloney was also pleased to see Hay Bale win his first race. "He had been knocking on the door," he said.

"He had a class edge on them today and he did a good job as he never felt 100% comfortable in the going."

A home-bred for Tony Penglase, Hay Bale is by the five times Gr.1 winning sprinter Canford Cliffs out of the Estambul mare La Lady.

Also dam of the winner Ell Factor, La Lady - a half-sister to the durable stakes winner Verco Road - was served last spring by Americain having produced a Reward for Effort colt.